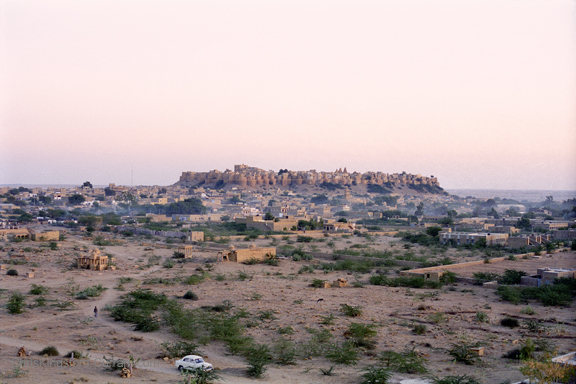 On my first visit to Jaisalmer in 1994, arriving off a ten hour train ride across the Thar from Jodhpur, I scrawled in my diary:
“What a place! Completely mediaeval; rats, open sewers, in the evening the power supply to the city failed and everywhere in darkness. Couldn’t get a ‘phone line to reserve a hotel in Udaipur. It’s like going on holiday to the 14th Century!”

The tourist media have made much of ‘Jaisalmer in Jeopardy’, the inevitable slow disintegration of the sandstone fort which is after all built on a giant heap of sand; blaming it on hoteliers and residents within the fort, whose drainage is gradually washing away the foundations. Equally though, this bandwagon has been exploited by those who are now building new tourist hotels in their dozens all around the perimeter, rapidly expanding this once small and isolated city.

Since the early 2000’s, a massive wind power programme has devoured huge swathes of the desert for many miles around Jaisalmer; whereas once it was possible to sit on a rooftop in the evening, enjoying the soft fingers of balmy breeze drifting in from an unseen horizon, perhaps from Pakistan or Gujarat, the skyline is now dotted after dark with hundreds of blinking red lights as far as the eye can see, marking the extent of this desecration, and a web of electrically lit streets now stretches further and further into the night.

It’s near impossible to take a snapshot of the cenotaphs at Bada Bagh without a backdrop of turbines, so close have they been built to the city’s heritage spots. While they doubtless provide cheap and reliable power to local residents, they have changed landscape and lives irrevocably. It breaks my heart to see little villages, which were once peaceful and isolated and remote, now swallowed up in a grid of pylons and transformers and all the paraphernalia which accompany this project.

On the train back to Jodhpur I chanced to meet an employee of Suzlon, the turbine company, who told me that building is coming to a stop now. There have been too many problems, too many lawsuits from local farmers bewildered by the whole enterprise, claiming damages for cows and goats which have been ‘killed by the windmills’.

There is still nowhere quite like Jaisalmer; a fairytale golden fortress deep in the desert; it’s just not quite so far away any more. I guess it’s impossible to hold back progress. Perhaps the damage was done in the Indo-Pakistan conflict, which was the catalyst for the first tarmac roads being built to the area in the 1960’s; or by the rural development grants which were responsible for much of the brick and stone building which nows largely replaces traditional construction. We cannot live in the past, nor wish it on others; but we can and should urge the architects of such programmes to pause for thought, to stop a moment and absorb the lessons we have at least partly learned in The West.