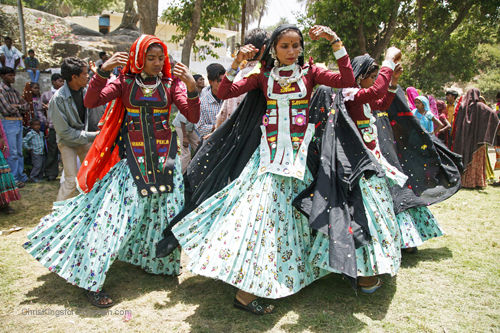 Phew. As I write I'm on my way home from Jodhpur, where it's been a stifling 40C for the last few days. The trouble with Jodhpur is that it's a city built on - and from - stone, which soaks up all the daytime sun and slowly releases it throughout the night, like a giant storage heater, so the temperature never really lets up even before the dawn. Some mornings I went up to the rooftop of my guesthouse at 5a.m. to catch the breeze, but it was scarcely worth the sweat of climbing the stairs.

This trip has been a relatively short one, mainly so I could follow up a couple of leads from last time, and to catch the 'Pipli Poonam', the Garasia tribal summer festival at the May full moon.

I started with a trek up into the Aravalli Hills, some 15Km from the nearest stretch of road. One might reasonably question the sanity of trekking - especially uphill - in full summer, but my schedule was constrained by the timing of the 'Poonam', and there's also the fact that by May the farming communities have returned to their villages from the winter grazing pastures. This not only saved me a hell of a hike, but also gave me the special opportunity to stay with a living, breathing community of troglodytes in their home environment. The isolated Rajput village where I stayed is a simple paradise, a Shangri-La tucked away in a lost valley high in the hills. The warmth and hospitality of these quiet people touched me deeply.

By contrast, the next excursion was something of a trial. We planned to visit some Rabari villages in Sirohi District, but got sidetracked slightly when we heard of a 'Ganga Thali' closer to base. It's a big party thrown by relatives after they return from a cremation at the River Ganges, involving some 2 or 3 thousand people from nearby villages - too good an opportunity to miss. Technically these events are illegal; like the dowry system, these extravagant displays of wealth and pride serve only to perpetuate the burden of rural debt. The reality on the ground is something else though - the organisers of this event had blown about 10 lakhs on it - enough to buy a fairly decent family car. We took care to get permission in advance from the local chief, which was freely granted, and which served us well. However whilst the crowd was not exactly hostile, they weren't exactly welcoming either. The great majority of people were actually very friendly, the trouble is it's hard for a foreigner to show his face at an event like this without drawing a LOT of attention. Once we'd acquired a crowd of 40 or 50 boys shadowing our every step, we started to disrupt the rather costly proceedings. Mahendra and I, and our Rabari guide Parbuji, eventually took refuge in a small shrine where we managed after a while to shake off most of our following. We had to take care though to avoid any further disturbance and after a while, having enough photos in the bag, we decided on a strategic exit.

The Garasia summer festival serves two basic functions; it's a time for the adivasi to mourn their dead, whose ashes are committed to the waters of the sacred lake at daybreak. It's also a chance for the younger villagers to get together in search of potential marriage partners. In stark contrast to Hindu convention, the Garasia custom is elopement; only after a few days do the amorous couple return together to their family homes in search of retrospective parental approval. The festival is slow to start; gradually small rings of girls form around bands of two or three drummers here and there. The village women are stern and shy, being unused to large crowds or indeed the attention of foreign photographers. However as the day wears on they find their feet and quite a party develops, especially as more and more alcohol is consumed by the young men. Again, a wary step is required. Most people are friendly enough, but it's very easy for trouble to flare up; indeed the festival is also well known as a time when scores are settled.

How sad I was to take the train back from the hills, even though it was to the city of Jodhpur, which I think of as 'home' in the very heart of Rajasthan. Still, the heat was a good excuse to put my feet up for a few days and read a good book, way too hot to be out and about. What a life...