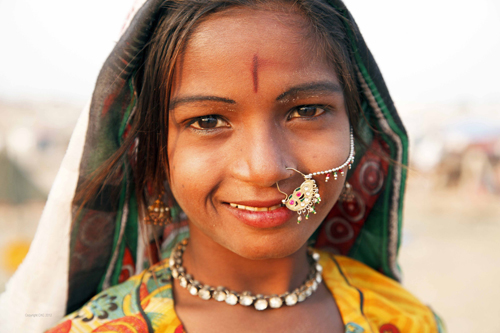 Despite almost 20 years of travelling backwards and forwards to Rajasthan, until this year I'd never made it to Pushkar. Determined to get a ringside seat for the 2011 mela, I booked a hotel from the UK and arrived a good 2 or 3 days before the official start. Coming straight from London, it was good to have a couple of days with my feet up in the garden of the hotel to recover properly from the journey and the jet lag.

Pushkar itself is a pleasant little town with plenty of interest, and it's easy to walk around there, once you've established an understanding with the touts who peddle 'blessings' on the ghats. The tourist count is pretty high but I guess that was to be expected. I wasn't quite prepared for the 'them and us' experience of walking around the fairground; I've been a few times to provincial cattle fairs and found it quite possible to strike up an acquaintance with the traders and share a camp fire with them. In Pushkar however you won't get far without being asked for money, and relationships are determined accordingly. At times it seemed the Indians and the tourists were operating in quite separate dimensions; the locals going about their business trying to ignore the intruders; the tourists filing around in groups furtively potting snapshots with telephoto lenses, in order not to get collared for baksheesh.

I'm kind of glad to have seen the fair at last. I loved the light there, and the magical atmosphere of the pastel-pink dusk; I enjoyed striking up a few temporary (if perhaps slightly mercenary) friendships with some of the predatory gypsy girls and their families. I found that after a day or so I was wise to most of their little tricks and could second-guess most of them, which was the cause of much genuine hilarity on both sides. This is not really how I like to work though and after a few days I was ready to move on, photographically at least.

That said, it's quite a seductive spot, I can easily understand how people wash up at Pushkar and are still to be found there 20 years later. It's a great place to hang out for a week or two, exchange notes with fellow travellers (Hi! to Sanna, Eva and Martin, Matthew and Christina) and soak up the atmosphere. I headed off towards Bikaner before the fair was over, being on a schedule and with appointments to keep; maybe next time I'll see it through to the finish.